II. Acid and Base

III. Acid-Base and Their Conjugate Pair

IV. Examples of Acid-Base and Their Conjugate Pair

VI. Try It Yourself!

In this post, we shall start with the fundamentals: the three theories of acid-base. This is then followed by the concept of acid-base and conjugate pair.

II. Acid and Base

There are three acid-base theories that are widely accepted in chemistry:

This theory works well with compounds such as HCl, H2SO4, H3PO4, NaOH, KOH, etc. All of those acids release H+ in water, and all of those bases release OH–.

Some organic compounds also exhibit this phenomenon. A famous example is acetic acid (CH3COOH), which is a carboxylic acid. Carboxylic acid, true to its name, is known to be weak acids. Other carboxylic acid examples: formic acid (HCOOH) and benzoic acid (C6H5COOH). All of them dissociate to give H+ in equilibrium. 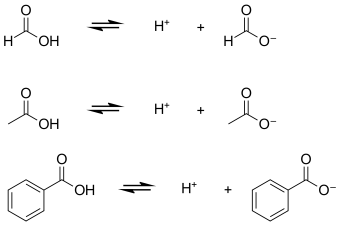 Unfortunately, this theory fails to explain why nitrogen-containing compounds such as NH3 (ammonia), Et3N (triethylamine) or C5H5N (pyridine), have basic properties even though: 1. they do not release OH– in water, and 2. they are able to react with acids (e.g. HCl) and neutralisation reaction can happen between them.

This theory also fails to explain that some organic compounds have inherent acid/base properties that are not really obvious when you only look at their structures.

This theory succesfully explains that nitrogen-containing compounds are basic because they are able to accept H+. Examples:

This theory also explains why some organic compounds are able to act as acids or bases. An example is acetophenone:

At a glance, you’d probably feel weird. In the Brønsted-Lowry theory, an acid is a donor and a base is an acceptor, but in the Lewis theory everything is the other way around??

Yes, it is indeed! And they are not contradictory, they are in line with each other:

Remember that in the Brønsted-Lowry theory, the acid is a proton donor. This means, the acid gives away a positive charge and therefore the overall charge of the acid goes down and becomes more negative.

You can also get the same thing when you accept an electron. If an acid accepts an electron, it takes in a negative charge and therefore the overall charge of the acid goes down and becomes more negative.

Can you see how they’re basically similar, it’s just they are looking at it from two different perspectives and two different cases.

A classic example of a Lewis acid-base reaction is the reaction of NH3 and BF3 (boron trifluoride):

In the example above, NH3 gives away its free electrons, which makes it a base. On the other hand, BF3 accepts the electrons and makes it an acid.

Let’s have a look at another example that involves an organic compound. Lewis acid TiCl4 is able to accept a pair of electrons from the carbonyl oxygen of propanal. In this reaction, propanal acts as a Lewis base.

This reaction is the initial step in Mukaiyama aldol addition.

III. Acid-Base and Their Conjugate Pair

Now let’s have a look at the table above in two different ways:

Let’s have a look at the ‘Forward Reaction’ column.

Here, if you look at the HA/A– pair, you’ll see that HA is an acid, and A– is a conjugate base. Therefore, we can say that: A– is the conjugate base of HA.

In case of the B/HB+ pair, we can say that: HB+ is the conjugate acid of B.

And now let’s have a look at the ‘Reverse Reaction’ column.

Here, if you look at HA/A– pair, you’ll see that HA is an conjugate acid, and A– is a base. Therefore, we can say that: HA is the conjugate acid of A–.

In case of B/HB+ pair, we can say that: B is the conjugate base of HB+.

This is very important to remember, as you will have to be able to know which species has which role as soon as you see a reaction.

If you have a look at each of the rows, you’ll realise that they retain their acid/base property. Take HA in the first row for example, it is an acid in the forward reaction, and it is a conjugate acid in the reverse reaction. In both cases it is still a base.

Therefore, a species that was once an acid (like HA as a reactant in the forward reaction) becomes a conjugate acid when we generate it as a product in the reverse reaction.

This also applies for the rest of the species above. In both examples, H2O is still an acid, NH4+ is also still an acid, and OH– is still a base. Each of them gets the ‘conjugate’ title when they are on the right side of the chemical equation.

This is quite obvious, but I would like to point it out anyway.

Not all bases are neutral like pyridine or triethylamine. Some bases are negatively charged, and such bases, if protonated, will form neutral conjugate acid (HB).

We saw this example in the deprotonation of acetophenone using methoxide ion.

IV. Examples of Acid-Base and Their Conjugate Pair

Let’s summarise all of that in a table:

If you look at the table column-wise and row-wise like before, can you see how the arguments from section III hold?

Let’s now see it the other way around:

Let’s summarise all of that in a table:

If you look at the table column-wise and row-wise like before, can you see how the arguments from section III hold?

So let’s have a look at the overall picture here!

There are three acid/base theories and all of them are useful in organic chemistry. However, the Brønsted-Lowry theory is probably the most common type we will encounter.

These are the only concepts that you need to arm yourself with in order to understand the next post.

VI. Try It Yourself!

Why not try to do some problems yourself? This time let’s use real organic compounds.

Which one is the acid/conjugate base pair or base/conjugate acid pair?

Let’s have another one:

Which one is the acid/conjugate base pair or base/conjugate acid pair?

If you need more examples, try doing examples 1 and 2 above by looking at the reverse reaction and determine the conjugate pairs (i.e. the products are now reactants, and the reactants are now products).

Compare the backwards reactions with the forward reactions and make a table like you saw in Section III and Section IV before. You should get a similar table like what we have and you can confirm that you are correct by looking at the table row-wise.

Other Posts in Acid, Base, and pKa Series